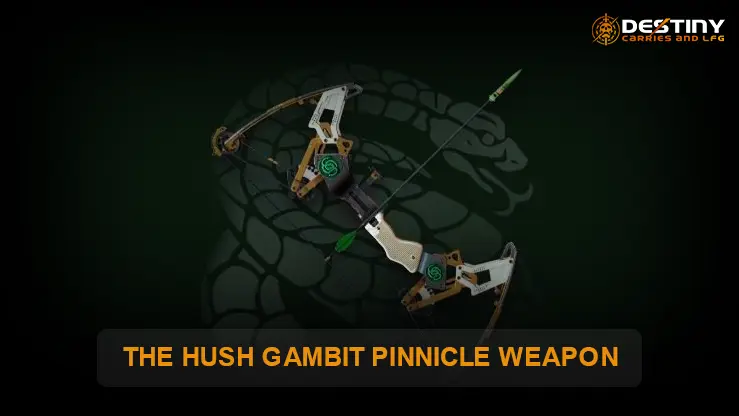 The Hush is a combat bow achieved through the completion of Gambit and all the content attached to it. The Hush is a powerful combat bow equipped with SOLAR charged damage. In suit with similar Pinnacle weapons, it takes quite a grind to achieve. Don’t feel discouraged though, with the right firing squad you’ll be the proud owner of the Hush in no time. If there is anything we at Destiny Carries and LFG can do, please let us know, we are happy to help!

The quest that unlocks Hush begins with speaking to the Drifter. You can locate the Drifter in the Annex of the Tower. There you will find the pursuit

Hush, Little Baby, which requires players to have a certain number of kills in Gambit along with medals earned. The criteria for that quest looks about like this:

The requirement of blows with a bow in Gambit is not surprising and still is achievable. The medal standard is likely to be the more difficult of the three. Either way, though, it’s still a fair ranked expectation — the medals obtained with a weapon other than a bow, which makes it any easier to complete.

This bow has become favorable due to its special perk; Archer’s Gambit. This perk is excellent because of how it affects the draw speed after a precision hit.  This perk only lasts 7 seconds, meaning there is a slight window in which intense damage to enemies. The primary perks associated with Hush are:

As a bonus, this weapon comes entirely Masterworked, which is nice because that boosts the overall accuracy. You can attach mods to this weapon too, directly in its slot for such. I recommend the mod Freehand Grip because it pairs well with the perk Archer’s Gambit. With the two combined, you can expect an immense increase in accuracy and fast speed when firing from the hip.

If you enjoy the TLW, then you are going to love Hush as the perks are just variations of each other. This Compound Bow is an excellent addition to your collection of weapons, with perks and mod slots that allow any Guardian to flourish in the field. If you are still wondering why to go with Hush after learning so much about it already, don’t worry, there are other reasons.

The Hush is Gambit Pinnacle Weapon in the class of Compound bows. It has a Precision Frame that allows for longer draw times with optimized damage. Hush is ideal for players who are attempting to proclaim mastery with the Combat Bow. So if this is you, don’t let this price stop you.

Why do you want the Hush over famed pieces like the TLW? Well, this is a favored bow due to the exceptional accuracy and speed that witch can be attained from all the perks and mods attached to it. The perk Archer’s Gambit provides massive draw speed bonuses that can equip any players with the skill needed to hit their targets. Who can be bored with that?

To purchase the Hush bow, you must have the Forsaken DLC and Annual Pass. Any of the platforms work; PC, PlayStation, Xbox. Once you have your platform squared away, you can choose the character you’re working with; Warlock, Hunter, or Titan.

Improved accuracy and range on the opening shot of attack.