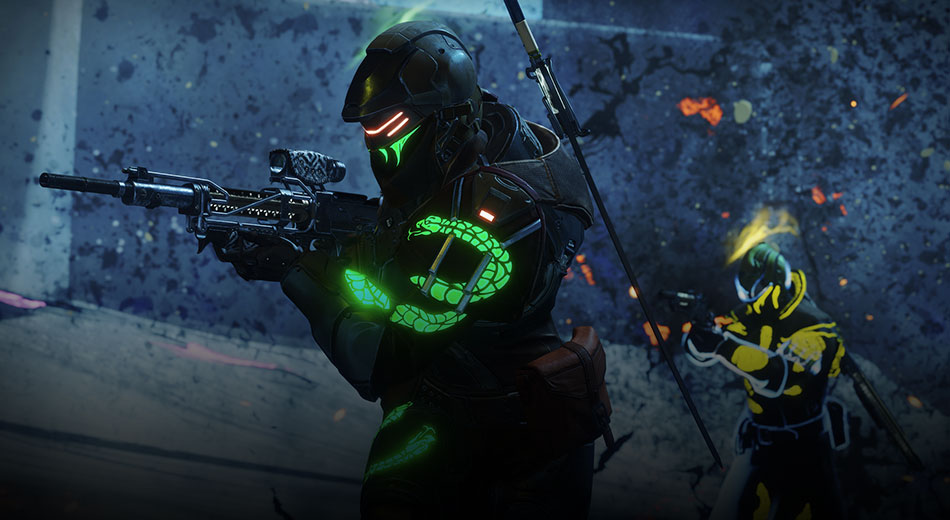 Shadowkeep is packed with some brand new exotic weapons, new raid content, and even the latest greatest Armor 2.0 systems. This is a new year in the context of what Destiny 2 has in store. The most recent releases are coming from Bungie directly. This is one of the first significant steps for the company on their own with Destiny 2. Activision has stepped down, and it feels like it’s for the better.

Check out what is updated on the roadmap, see what new gear is coming out, gain an understanding of the rewards that are to come,  learn more about the Nightmare Hunts, and the Memories that Eris Morn unleashes. There is a lot in store with this new Shadowkeep expansion, so make sure you’re staying up to date with everything as it unfolds! 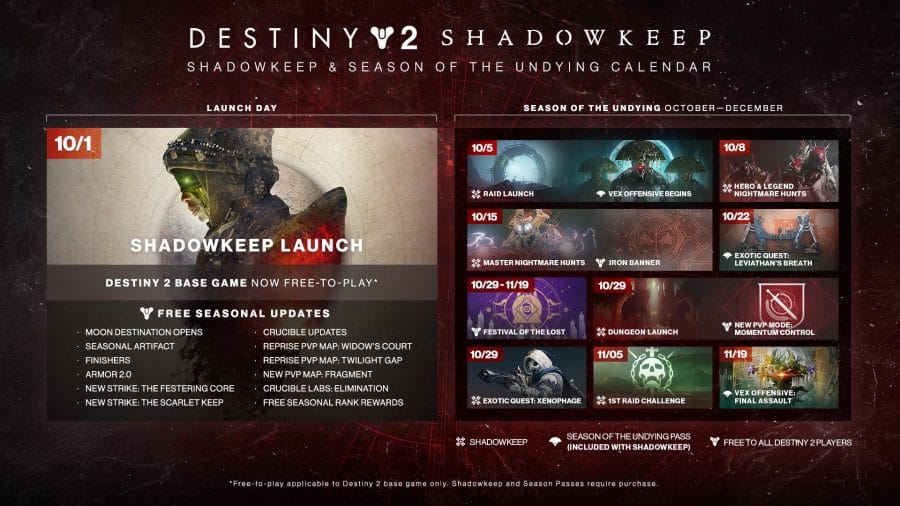 The Season of the Undying has a lot to release onto the fandom of Destiny 2. October 5th marks the moment that new raids and the notorious Vex Offensive became available to the public. Following that, we took a seat for the Dungeon, The Pit of Hersey.

Expectedly we also were hit with the exotic quests that are becoming available; Leviathan’s Breath, Xenophage. Xenophage was swapped for the Divinity, so don’t feel confused.

There has also been an update with Nightmare Hunts throughout the entirety of the expansion. Hero Nightmare Hunts began on October 8th, Legend on the 15th, and Master Hunts on the 22nd. This line up was not how it was initially broadcasted, so make sure you’re staying with the updates at Bungie.

There is a range of new items available through the Eververse- guns and armor alike. They bounce back and forth from originating with Shadowkeep or the Season of the Undying, but either way, they are coming around at the same time.

There are Empyrean bundle packs available for different character types, along with pieces like Assassin’s Cowl, Phoenix Cradle, and Stormdancer’s Brace. You can expect some power pieces such as the Deathbringer, a Rocket Launcher.

Leviathan’s Breath has been a popular one, as well. The trace rifle being demanded right now is the Divinity despite its meager impact. Another one right there with Divinity if you’re trying to get away from the “norm,” check out the Wavesplitter.

Auto Rifles are all in style right now, and I would recommend the Monte Carlo from this new expansion. Reload speed is incredible, alongside the 600 rounds per minute. Solid and steady.

Eriana’s Vow is Hand Cannon that is suitable for most playing sets. The impact is over the top at 100 and impressively fires at 90 rounds per minute. This weapons range is impeccable, leaving it one of the most desirable weapons so far in Destiny 2. It comes prepacked with Looks Can Kill, a reliable intrinsic perk.

Some neat Ornaments can be equipped to your weapons or armor pieces. The list is a long one, so take some notes. 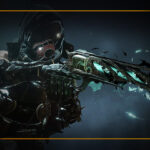 There has also been some ghosts, sparrows, and ships released, each with their perks. Pieces like the Lion Guardant Shell, Propheteer Shell, Scarlet Swarm Shell, Lunar Shell, Lander Shell, and Ophiuchus Shell are all making waves as Shells.

Machinoform, Refashioned Shapes, Quality Cut, and Never Live It Down are all the ships in this Season. Golden Pride, Invasive Species, The Regal Howl, The Jotuneer, The Blood Runner, and the Four Degrees of Separation are all vehicle options with the Shadowkeep expansion. These lists are tedious, so get selecting your most preferred as soon as possible.

Rewards for the Season Pass

There is a long list of potential rewards for this Season Pass. You don’t need to be picky though, aim for them all- or get a little help doing so. Once the Season of the Undying is over, all the ranks and artifacts will reset and be replaced with the new seasons’ content. Some of the expected rewards are the following, but not limited to; 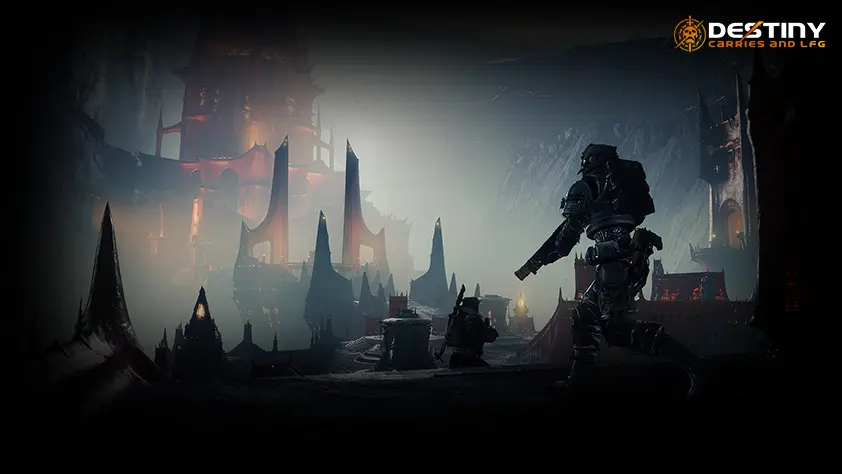 This both has its ups and downs.  There is a mixture of reviews on these challenges, some saying they are too hard, while others too simple. They are about half the length of a strike with a dominant boss at the end that is titled the Nightmare.

The rewards from this experience are well worth it whether you like them or not. This is where affiliations such as Destiny Carries LFG come in, working through these activities to help give you time for the real deal action.

There are three new nightmare hunts brought to the Moon as weekly challenges. These give Guardians a particular Nightmare Essence, which can be used as part of Dreambane armor and weapons that originate from the Moon.

There is Powerful gear dropped every week for each of the three hunts. These can be done at any difficulty.

Essences offer a unique twist to this gameplay and should be accounted for when preparing to jump into the Hunts.

To be noted, the traditional Nightfall Strike is now The Ordeal. The difficulty on this can reach the peak of 980 if you let it, really testing those “muscles.” This is also how you get the Powerful gear that comes with these playthroughs.

The Ordeal runs at a higher challenging rate toward your progress for the Powerful, though, so like I said, testing your “muscles.”

The most recent of Eris’s Memories

There is a weekly challenge where you face off against the phantoms of Eris Morn’s dead fireteam through simple quests. Vell Tarlowe is a mighty Titan that has returned, and the only way to get past this Memory is to find its mark. This challenge is just a replay from the campaign, requiring you to wrap up the mission like any other.

You will need to retrieve the marks pieces from the Nightmare Hunts, requiring you to defeat enemies within these hunts. Aim for melee strikes best you can as they are going to make the enemies drop the pieces.

For Vell Tarlowe’s mark, you are going to need to gather up 25 pieces total. On average, this will be two to three Nightmare Hunts, not an unreasonable expectation. They drop in pairs of three, so keep count, and you’ll be done in no time. You are going to wrap this playthrough up by heading to the Sanctuary on the Moon.

You will go through the portal and find Eris Morn to give her the mark of Vells phantom. It is here you will earn the Powerful drop from the chest.

What did you think of the campaign ending?

This was a letdown for sure, being as short as it was. I wanted to see more from the directors at Bungie with the campaign altogether, but the ending was the shallowest pit of them all.

I hope with the next Season they give us more to look forward to. I’m doing my best not to give away any spoilers while still making my case known if you are playing for the grand finale, sorry to burst your bubble.

Don’t feel discouraged by this, though. There is still a lot going on with the compacted experience of Shadowkeep. It is one of the most significant releases from Destiny 2; you can expect there to be endless content as time moves forward. The Season of the Undying has only began to unravel.

There is still so much time to take strides; the campaign is only the beginning of these efforts. We can expect further releases from the Nightmare Hunts, the Memories, from Raids, giving us more Vex action, and even further involved quests for some more weapons that are looming around the corner.