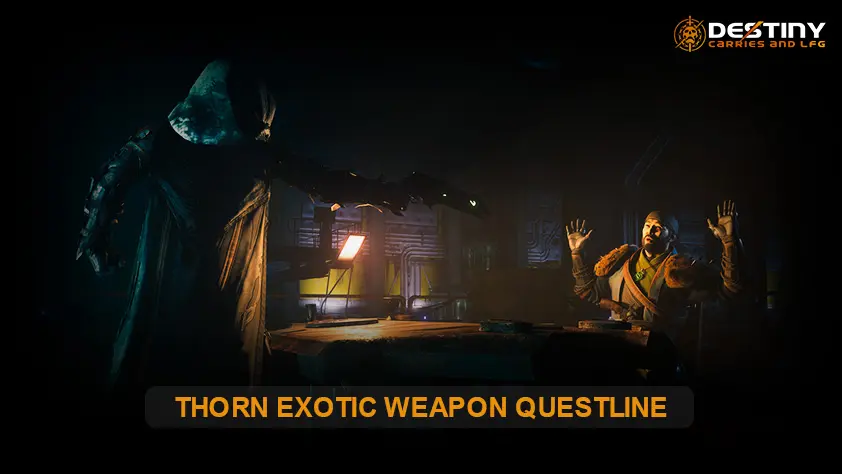 The new and improved Destiny 2 Thorn fires the same piercing, corrosive rounds of the original model, and comes with a new special perk called Soul Devourer. When you kill an enemy with Thorn, you’ll spawn a green orb called a Remnant. Thanks to Soul Devourer, whenever you pick up a Remnant, you’ll instantly refill some of your magazine and your shots will temporarily deal more damage.

The Destiny 2 Thorn commands a fun, fluid perk combo that really sets it apart from its original version and other Exotics, Therefore, it’s definitely a weapon you’ll want to own. To obtain it, you’ll need to clear a fairly lengthy Exotic quest called Independent Study.

Thorn is a Hand Cannon that is acquired from completing the questline Independent Study.

This quest starts in the EDZ. Thorn deals KINETIC damage and is equippable in the kinetic weapon slot. If you need assistance completing this weapon quest the Destiny Carries LFG Experts are here to help!

The Shadows Of Yor (Thorn Lore)

That wasn’t the end of the story of Thorn, however. Years later, some Guardians started to wonder about the power of Darkness Dredgen Yor had wielded, and the weapon he’d used. They also started to believe that maybe the stories of the villainous fallen Guardian weren’t as truthful as they’d been told. The group started to investigate Yor, and eventually, to follow some of his beliefs. They called themselves the Shadows of Yor.

As the Shadows kept on their pursuits, they tried to capture the power of Thorn without its corrupting influence. Eventually, they succeeded, creating replicas of Thorn that maintained much of its power, seemingly without causing people to go all evil. Those replicas started showing up in the Crucible–basically, Destiny 1 players using Thorn. That drew the attention of Shin Malphur, who saw an unknown, sinister plan in the use of Yor’s power and spreading it out to unwitting Guardians. He approached the Vanguard, the Guardians’ leadership, but was brushed off since seemingly nothing was wrong. Convinced the Shadows of Yor were corrupted and up to something Darkness-related, Shin started hunting them.

The Shadows went into hiding and scattered, and some seemingly disbanded from the group–including one rogue Guardian who called himself the Drifter.

Be the first to review “Thorn” Cancel reply