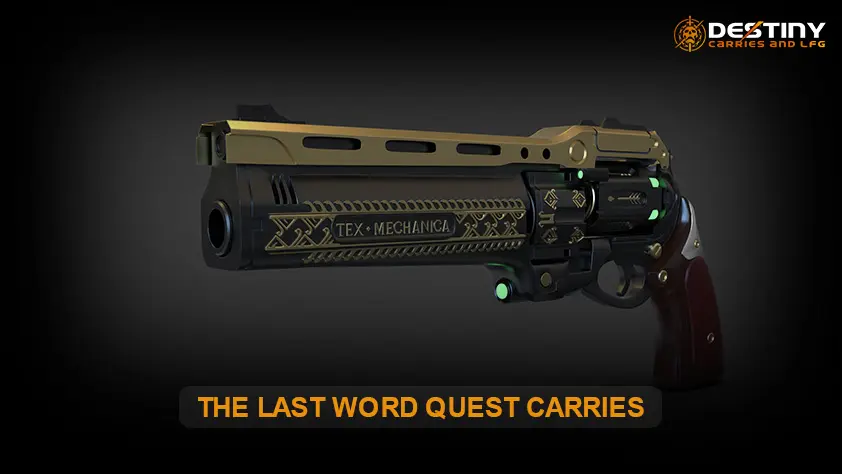 The Last Word Quest. Seek the guidance of one who dabbles in the arcane to learn more. This unknown artifact seethes with an odd, familiar sickness.

Purge the artifact of its sickness.

“Some who walk a darker path believe what we call ‘Weapons of Sorrow’ ain’t a complete science. This artifact could be key to a new understanding- if you’re willing to risk temptation.” – The Drifter

The artifact is now cleansed. But what is its purpose?

“The artifact is free of disease now. I might be able to see what it’s for. Bring it to me. Let’s see how far down this dead-end leads.” – The Drifter

Want to see what this artifact can do? Feed it Light by defeating Guardians in the Crucible. Being defeated will impede progress.

“The 7th Book of Sorrow speaks of a great Unmaking. Old friends of mine believe it’s the blueprint for terrible weapons made in its name. I think they’re mostly right, but to find out some of your friends are gonna have to suffer.” – The Drifter

The artifact is calling to something dark. Uncover a dark ritual on Titan and stop the twisted ceremony.

“The artifact is in pain. Can you hear it? It’s made to feed on Light, and that Light is feeding something other. The trail is faint, but the screams don’t lie. Get to Titan. Answers wait where dead things play.” – The Drifter

You found a Guardian’s helmet penetrated by a unique bullet.

“The artifact was part of a Hive ritual tied to their efforts to perfect the Weapons of Sorrow. But that helm you found? Only one thing can cut through a Guardian like that. We may be too late. New weapons may already be in play.” – The Drifter

The Hive weapon master is creating new Weapons of Sorrow. You need to stop it. Gather powerful objects to sully your Light and complete the ritual.

“This is it, Guardian- the furthest you’ve gone down sorrow’s road. There ain’t no turnin’ back. If the Hive are upgrading their arsenal, we need to know where and how, so we can stop it and learn from it. Don’t worry. This ritual won’t make you a bad guy It’ll just feel like it.” – The Drifter

You have all you need to track the Hive weapon master.

“Using the thorn from your dead friend’s helm and lettin’ corruption touch your Light ain’t an easy call. But you didn’t back down. Come see me and we’ll track the weapon that fired that jagged bit of death.” – The Drifter

Enkaar, the Hive weapon master, is hiding in Hellrise Canyon in the Tangled Shore. Hunt him down!

“Time to hunt us a Hive weapons master and put an end to whatever he’s cookin’ up. This is where you get to be a hero, and we both get to learn a little bit more about things best left undiscovered. Careful out there, you’ll be alone, and the odds’ll be stacked. Hope you make it back.” -The Drifter

You defeated the Hive weapon master thanks to a mysterious gift, the Last Word. What would the Drifter say about that?

“The hunt is over. Our weapon master is defeated, thanks to you. And in his wake, you’ve found the Last Word? Well I’ll be. Hm. It’s probably best we close this case down. For now.” – The Drifter

Knew this day would come, and with it, one last lesson…

There’s an end to all things, kid. Good and bad.

Sure, the best times seem small, and the bad tend to linger, but the only permanent is eternity.

If you’re lucky, someday you will too.

For now, though, you’ve got road yet traveled and lives yet lived.

I know you got hate in you. Most do. Trick is to use it, ‘stead of it usin’ you.

But you know this—vengeance is a motivator, not the motive.

Meant to—hoped to—say these words to you one last time in person, but writin’ ’em down seems the safe bet with the prey we’re trackin’.

Worst part about bein’ a good guy? As much as you may want it, you can’t always win. But that truth don’t bother me. We do the right thing, ’cause the right thing needs doin’. So, when another does harm—casts their shadow upon you or your kin—you go ‘head and hunt for the justice needed to answer any sins inflicted.

Don’t hunt ’em ’cause you been wronged.

Hunt ’em ’cause what they did was wrong.

There’s a world of difference there, kid.

One makes you selfish. The other makes you a hero.

And I see a hero in you.

And with this last good lesson, a gift. I know it feels right in your hand—its weight easy, its trigger smooth. Use it as you will—I know you’ll use it right.

It’s yours now, ’til the last flame dies and all words’ve been spoken.

—A letter to Shin Malphur from his third father, Jaren Ward, written before Ward’s ill-fated showdown with the infamous Dredgen Yor in the wooded hollow beyond Beggars’ Gulch

Be the first to review “The Last Word” Cancel reply