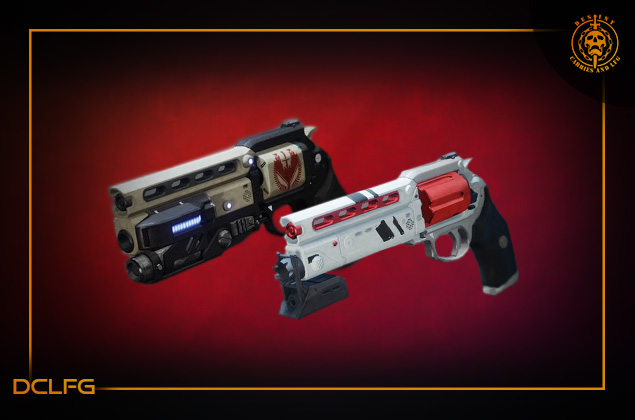 UNLOCK ONE OF THE BEST HAND CANNONS IN DESTINY

WEAPON QUESTLINE
LORD SHAXX IN THE TOWER WILL GIVE YOU ACCESS TO THE LUNA’S HOWL QUEST.

Looking for Luna’s Howl Hand Cannon? Let Destiny Carries LFG Experts help you to finish the Legendary Quest. In Destiny 2: Forsaken, there is certain tasks assigned by Lord Shaxx in order to get Luna’s Howl.

To unlock these tasks, you’ll need to visit Shaxx in the Tower and obtain the “Shock and Denial” Pursuit to begin the process of earning Luna’s Howl.

There are several steps needed to be completed to unlock Luna’s Howl in Destiny 2: Forsaken all of which we’ve listed below.

You will need to complete several tough quests in the competitive playlist to acquire the Luna’s Howl. We offer both each step individually and the full questline. We also have a Glory Rank Boosting service if you have already completed the quest steps.

There’s also Polygonal Rifling, which increases stability and Drop Mag which does waste ammo, but greatly boosts your reload speed.

The next two fun perks are Zen Moment and Magnificent Howl.

The first increases the weapon’s stability when causing damage, and the second grants you a short window of bonus damage until your next kill or miss, after landing two precision shots rapidly.

The Legendary Luna’s Howl Hand Cannon also has some interesting tracking perks, if you’re into that sort of thing. It has both a Kill Tracker, adding up your overall kills, and a Crucible Tracker, which tracks the number of people you’ve eliminated there.

Which would have been a great asset to have on the quest to get the damned gun, but oh well.

Check out the Not Forgotten Legendary Hand Cannon Carries.

“Guardians never die. But we don’t forget those who do.” —Lord Shaxx

Josef opened the door. Shaxx filled the hallway beyond.
“You look like hell,” said the Crucible Handler.

Josef scoffed. “Get out of here. I have Hive to hunt. No time for the Crucible today.”
“Hive. You lost her on the Moon?”

Josef said nothing.
“You aren’t the only Guardian to leave loved ones behind on that rock.” Shaxx held out a long, lacquered box. “The Gunsmith asked me to deliver this personally.”
“What’s Banshee thinking? I can’t afford this.”

“I took care of it. Scavenged parts from my personal collection.”
Josef considered it a moment.
“It’s a good gun.”
“She was a good dog. This isn’t a replacement. But it will help you finish your business with the Hive. Then I expect to see you back in the Crucible. We could use the inspiration.”

Not Forgotten is a Legendary Energy Hand Cannon with Precision Frame and the special perk Magnificent Howl.

Magnificent Howl – Rapidly landing two precision shots grants a short period of bonus damage until your next kill or miss.

IS NOT FORGOTTEN WORTH IT?

Each player will have to answer that for themselves. The Not Forgotten shares the same signature perks as Luna’s Howl: Zen Moment and Magnificent Howl. Where the two weapons differ are in their other perks.

The Not Forgotten getting a huge boost to the Range stat both in its first two perks (Extended Barrel and Accurized Rounds) therefore, its automatic Range Masterwork. These push the Range of Not Forgotten to almost double that of the Luna’s Howl.

In Destiny 2, not only does Range mean less damage drop-off at extended distances, but it also means more accurate and consistent shots, therefore, making the Not Forgotten the same weapon as Luna’s Howl but one that will be more reliable and useful at a longer range.

This is definitely a top-tier weapon even above the Luna’s Howl, which will likely be chased by the most hardcore of PvP players.

Read more about the Not Forgotten Legendary Hand Cannon.