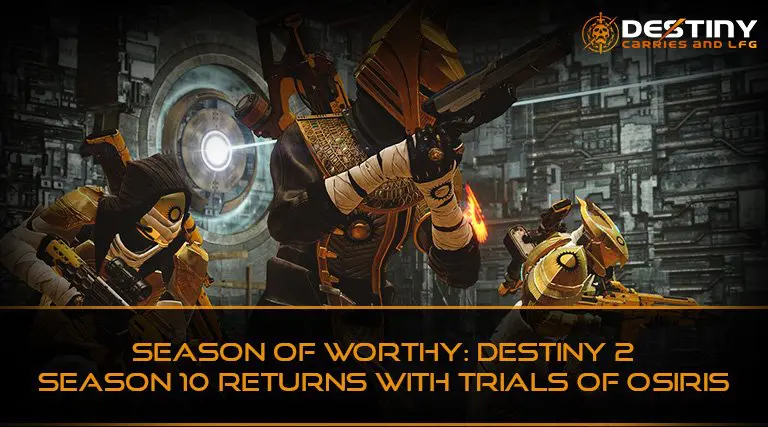 Do you remember the good old days when you could buy a Trials Passage for 500 glimmer and participate in high-stakes, 3v3 deathmatches all weekend long? You would meet up with your fireteam at the Reef for a chance to gain access to the Lighthouse with a Flawless Victory.

All that went away when Destiny 1 ended and Destiny 2 began. Guardians put down their Trials Passage Cards for good it seemed. Although, some never gave up hope opting instead to petition Bungie to reinstate the weekend event. So far only a little over 5,000 Guardians have signed the petition.

And yet, there might be hope on the horizon.

We’re only partway through Season of Dawn. Guardians already saved Saint-14 and solved the Corridors of Time and they’re already looking forward to the next season. Their enthusiasm led some to data-mine the Destiny API in the recent hotfix for clues about what’s next.

Keep reading to find out why we think the Trials of Osiris (ToO) might return in Season 10 and why some players are a little worried about this news.

"Trials of Osiris and More"

On January 28, Ginsor tweeted a leak they had data-mined, “With the restoration of the Lighthouse complete, [ToO] and more will return in Season of the Worthy.” Immediately, fans started saying this would be a big mistake. Why? One word: cheating.

Back in 2016, Destiny began permanently banning the consoles of gamers who cheated in ToO. What were the cheaters doing? Some reported cheaters spamming them through the PS Network messages and causing notifications to obscure the in-game radar. Others reported DDoS attacks meant to kick players from the network entirely during a match in order to gain victory.

Players are afraid this will happen again if Bungie brings back the most intense PvP match in Destiny’s history. But Bungie has already confirmed they still plan on bringing back the Trials and they’ve vowed to fight harder this time to keep the trolls and the cheaters at bay.

How Are They Going to Keep the Cheaters at Bay?

While they will continue to ban accounts and consoles, Bungie has already suggested a couple of ways they might make cheating less enticing. The first of which is to make the Trials pay-to-play.

Destiny 2 recently became free-to-play with story campaigns being the main money-driver for Bungie. This opened up the door to casual players and trolls alike.

If Bungie makes ToO pay-to-play, gamers will then be putting money into their characters. If they cheat and get banned, they lose their characters and all they earned in the Trials plus the money they put into them.

This may discourage some, but even professional athletes cheat and they’re getting paid big money. Some might get enough of a kick out of cheating and trolling to pay and still cheat.

You all know the grind. You fight daily to gain new engrams with powerful weapons and armor. Your power level increases and you become more powerful by the day.

What if that could go away in an instant? All that work, poof, gone? You’d probably toe the line and never think of cheating if you were a cheater, right?

That’s what Bungie is hoping for. They’re considering a power minimum to participate in ToO. Even if you had the money, you could jump in to play until you had spent a significant amount of time leveling-up your Guardian.

This would decrease the risk that cheaters could just buy Passage and disrupt the game for other players. Whether this and a pay-to-play ToO keeps cheaters at bay, we don’t know. But we do know for sure that ToO will be back next season, so start honing “the right weapon for the right moment” because you’re going to need it.

If you’re someone who hates any kind of spoiler, even rumored bits of information, you might want to stop here. We’re going to talk about some story-related leaks from Ginsor’s data-mine.

Bungie’s already confirmed this, but Ginsor leaked the endgame for Season of Dawn. It’s called The Empyrean Foundation and it’s the final event before we head into Season of Worthy.

We’re going to talk to Saint-14 and he’s going to ask us to build a beacon. This beacon will tie into next season’s story. We’ll be fighting near the Obelisk in the tower thus you need to be sure you’ve unlocked it before Empyrean drops next week.

Empyrean is a massive community event requiring Fractaline. You’ll be helping the community reach seven goals already confirmed by Bungie. If you contribute a full 5,000 Polarized Fractaline before the end of the season, you will receive a special Triumph Emblem.

Ginsor found some cinematic-related content in the latest hotfix. They’re voice lines and they’ve caused quite a stir in the Destiny community.

The voice is talking to an “old man” and calls him a “thug,” “murderer,” and “betrayer.” He talks about a “line drawn in this system” and then asks what side the old man stands on, the light or the dark side.

Ginsor claims he found out who the “old man” is but won’t tell anyone because he’s enjoying the speculation too much. Some Guardians think the voice might be Osiris talking to crazy old Rasputin. Others think it might be Osiris chatting to us in the future and calling you, Guardian, an old man.

Either way, there is a choice coming for someone. If it’s part of your Guardian’s story, you might soon be forced to choose sides in a faction war of some kind. We’ve known for a while that the Darkness is coming and some would be delighted to use a Darkness subclass and suit-up with some wicked powers.

What Will Happen in the Season of Worthy?

Will we be fighting each other outside the Crucible? What’s actually in store for us in Season 10? Since Ginsor’s not telling, we’ll just have to wait until the end of the Season of Dawn.

All we know for sure is that the Trials of Osiris will make a comeback and the Darkness is coming. Be sure to stay tuned and check out our guides for the latest information on Destiny 2.