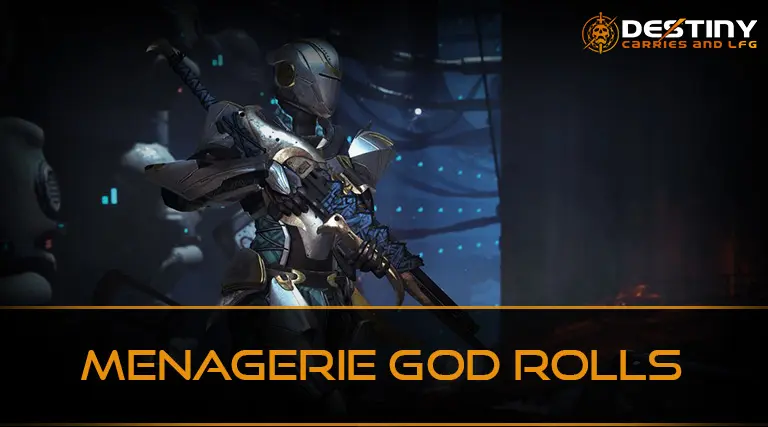 Menagerie God Roles can be farmed easily right now. The most generous farm in Destiny history is about to end. The Menagerie chest is going from giving out 6 – 9 rewards per run to just one or two, as Bungie is patching a glitch that let you run back and forth out of the room opening the chest multiple times before the time runs out and ends of the activity.

You have until July 9 until that patch hits, and fixes the ability to get multiple chests. You can keep farming until than. As such, I’ve decided to make a list Menagerie weapons “god rolls” that have been obtained using the Menagerie Chest farming. Most of Calus’ new weapons are worth chasing after, and there are a few old ones in the loot pool as well worth hunting for. It isn’t worth getting more than a set of Menagerie armor or two because all armor is changing dramatically with Destiny 2’s Shadowkeep.

Feeding Frenzy/Swashbuckler – Feeding Frenzy on Epicurean is just fantastic all around, and if you combine it with Swashbuckler which stacks huge damage on melee kills this does a ton of damage to majors and potentially even bosses. It’s the only fusion that can roll with it, which makes it pretty special.

Feeding Frenzy/Kill Clip – Because of the range of Epicurean, I’m not a huge fan of the Swashbuckler idea myself, I prefer Kill Clip or Rampage because the crazy fast reload means big damage without any special qualifying set-up.

Snapshot/Box Breathing – Snapshot is mandatory on pretty much any sniper and Box Breathing is a solid pick for most modes.

Snapshot/Quickdraw – This is mainly for quick PvP sniping.

Snapshot/Moving Target – My favorite for PvP since I am bad at sniping.

No Distractions/Box Breathing – No flinch plus the damage from Box Breathing is a neat combo, even if you’re trading Snapshot.

Outlaw/Rampage – The classic combo for like, any weapon that can roll it, it’s particularly good on Austringer, probably the best 140 rpm Hand Cannon out there.

Outlaw/Demolitionist – Usually you only see this on special weapons but on Austringer it’s like, five kills for a full grenade. That’s quite fun for PvE.

Subsistence/Rampage – Speaking of fun for PvE, this is my new favorite roll as you can just shred through most enemies without ever reloading. Yes, it neuters your reserves but literally any kill with a secondary weapon will probably get you primary ammo back so this isn’t really as big as issue as people say.

Feeding Frenzy/Rangefinger – The only Machine Gun that can roll Rangefinder, making it even more of a Scout Rifle than ever. This is fun

Field Prep/Rampage – Big reserves and big damage, this is the one I use in PvE

Feeding Frenzy/Trench Barrel – Any shotgun that can roll Trench Barrel is solid in this day and age, though I’m not wild about it for a slow firing shotty like Imperial here.

Graverobber/Swashbuckler – Amazing combo. Melee kills now stack massive damage and reload what is otherwise a slow-to-reload shotgun. This is a blast, you’ll just wish you had more ammo for it.

Drang and Calus Mini-Tool – I honestly don’t like either of these that much so I haven’t cared about searching for god rolls for them. Mini-Tool can’t even roll Rampage!

The Classics – Dust Rock Blues, focus on range for PvP, Erentil, fast-charging, Under Pressure/Tap the Trigger for PvP, and my personal favorite Smuggler’s Word with Outlaw/Kill Clip/Rampage with minor spec to shred mobs. I have 20,000 kills on mine.

Here’s a chalice recipe list if you need it.