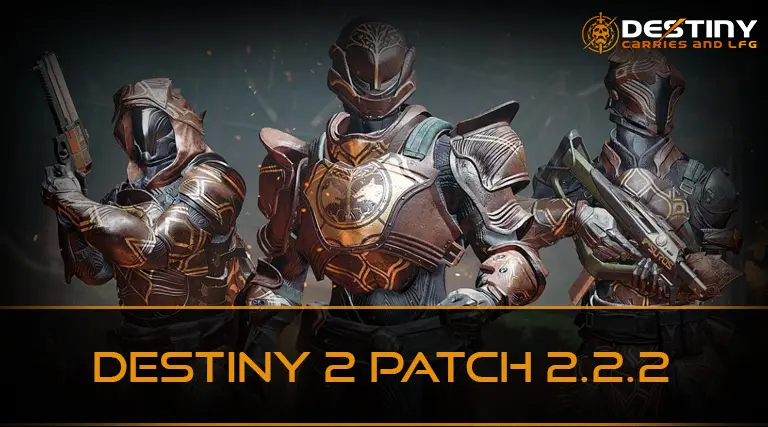 Destiny 2 Patch 2.2.2 May 7, 2019. In its weekly blog, Bungie revealed an upcoming patch for Destiny 2. Set for May 7, the new patch will solve several of the game’s major bugs, including one that impedes progress on Xur’s new questline. The Arbalest Exotic Fusion Rifle will also join the general loot pool for players after The Revelry ends.

Destiny 2 Patch 2.2.2 will add no new content to Destiny 2. Instead, it will fix issues like players not earning Dreaming City lore after an Ascendant Challenge. There are also several bugs with the way certain abilities interact with enemies. Combination Blow, Warlock’s Blink, and Chaos Reach abilities will see fixes on May 7.

The patch will also solve several issues introduced around The Revelry and Arc Week. Players who received duplicate items from the Jubilant Engrams or the wrong Arc Week emote will see an in-game message informing them how Bungie solved their problem. The “Verdant Light: Competitive” Revelry Triumph will also retroactively require fewer orbs, and will automatically complete for players who earned it during The Revelry.

Bungie will also fix The Tower quest step for the Invitation of the Nine on May 7. There was an issue with the quest on its initial release that made it impossible to finish.Players will be able to complete The Tower and continue the story when next week’s patch hits.

May 7 also marks the end of The Revelry. Eva Levante will be leaving the Tower for another season, and taking her easy to earn Arbalest Exotic with her. When Eva goes, Arbalest will drop from any source as a member of the Exotic loot pool, like Thunderlord last year.

However, Bungie clarified in the blog that Arbalest is currently bugged. At first, it’ll only be available for players who own the Destiny 2: Forsaken Annual Pass. Bungie intends Arbalest to be a free weapon for all players, but players who don’t have the Annual Pass won’t be able to pull Arbalest from their Collection or earn it from random loot sources. Bungie is investigating the issue and will make Arbalest available to all in a different patch.

Patch 2.2.2 will also introduce changes to the Spectral Blades Super. Bungie hasn’t released exact details yet, but the Super will be less frustrating to play against starting this Tuesday.

The end of the Revelry also marks the end of Season of the Drifter’s content schedule. Destiny’s next season, Season of Opulence, is set to go live in June.

We are deep into the third and final week of our spring celebration. You have until the weekly reset on May 7 to partake in Eva’s tonic and enjoy the festivities while they last. After that, Arbalest will be available as an Exotic drop. If you were a player who didn’t enjoy the extra abilities in Competitive, you can celebrate the return to order on May 7.

Earlier this week, we took a stroll into the depths of the Shattered Throne. A few representatives from the teams who helped build the mysterious dungeon offered some developer commentary on their motivations and design philosophies.
Did you miss it?
You missed it, didn’t you?
It’s OK, we saved it for you… this time. You can watch the entire Shattered Throne Ride Along here.

It’s time for the next update to the live game. Next week, on May 7, we’ll be deploying update 2.2.2. This will include the changes to Spectral Blades we discussed a few weeks ago, as well as a few other items. Here is a preview of what you can expect.

Whenever we send new content from our servers to your machines, @BungieHelp is a good source to follow. We’ll keep you in the loop on when the download begins and when our housekeeping ends.

Our Player Support Team has an update on known issues and upcoming fixes.

Next week, Destiny 2 Update 2.2.2 will become available, and all players will need to download and install this update once it is live.
To see this release’s deployment timeline when it becomes available, players should follow @BungieHelp on Twitter or monitor our support feed on help.bungie.net.

With the upcoming launch of Destiny 2 Update 2.2.2, we’d like to take the opportunity to follow up on the resolution of a sampling of player-impacting issues that have emerged recently in Destiny 2.

For a complete list of resolved issue once 2.2.2 is out in the wild, players should keep an eye on our Updates page.

Next Tuesday at the weekly reset, the Revelry will come to an end. At that time, unearned and unclaimed Revelry Triumphs will become hidden. Players will no longer be eligible to earn progress toward Revelry pursuits. The “Verdant Light: Competitive” Triumph will still be visible and completable if players generated the 20 necessary orbs to complete it after the update.
Additionally, Arbalest will no longer be eligible for purchase from Eva Levante, and will be available only as a reward drop from loot sources.
While Arbalest is intended to be available to all players following the conclusion of the Revelry, we have become aware of an issue where players who do not own the Forsaken Annual Pass cannot reclaim Arbalest from their Exotic collection, and Arbalest will not be available to these players as a loot drop.
We are investigating this issue and are working to make Arbalest available to all players in a future update.

Featured below are a list of recently emerged issues we are tracking in Destiny 2.

For the full list of known issues, players should visit our Destiny 2 Vital Information and Known Issues page.