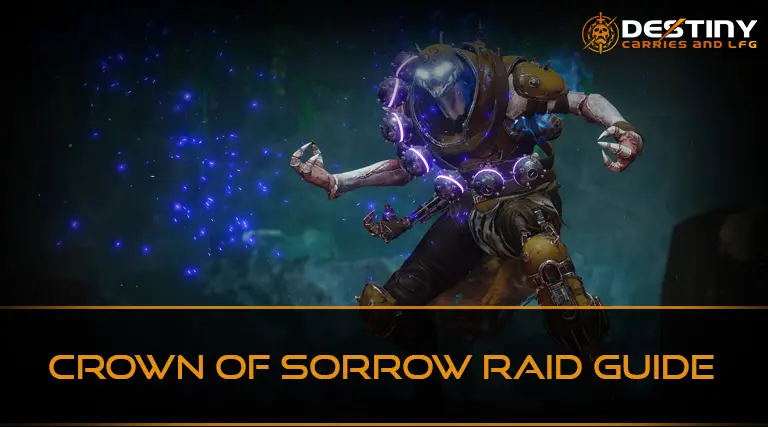 The initial Crown of Sorrow encounter isn’t really a typical boss fight in the sense that you’re facing a large enemy. Instead, players are referring to as ‘The Witch’s Ritual’ requires that the raid team carefully balance several different mechanics and changing conditions all while fending off waves of tough Hive enemies. For this encounter we recommend all players have at least 700 power, and the higher your power level the better.

Before the encounter begins, you’ll see two Hive Knights flanking a large central glowing circle. Standing in this circle and “activating” it will transfer a “Witch’s Blessing” effect to all players who are in the circle. Activating the Witch’s Blessing also starts the encounter so make sure you’re ready. Lastly, only certain raid members should get the blessing. Divide your raid team into three groups of two and have one player from each group receive the blessing.

When the encounter starts, you’ll notice certain enemies are “blessed,” which means that only players with the Witch’s Blessing can damage them. Those who aren’t blessed, can damage non-blessed enemies. Your first goal is to eliminate the Blessed Hive Knights. Once all the Knights are dead, three large purple crystals will spawn in a random order towards the front of the arena (either in the center, to the left, or to the right).

To efficiently destroy each crystal, both a blessed and a non-blessed player needs to be shooting it at the same time. When all three crystals are destroyed, all players should head to the glowing purple stone obelisk (looks like a large stone sphere) at the center-front of the map. Stand within the radius of the obelisks’ aura and then shoot the obelisk to “transfer” the Witch’s Blessing to the non-blessed players.

If you take too long to transfer the Witch’s Blessing, it morphs into a Witch’s Curse and kills the affected player. This process of killing Knights, destroying crystals, and transferring Witch’s Blessing repeats over a number of cycles, and later cycles become harder because Hive Ogres start spawning in as well. The Ogres spawn in pairs, one bless and one non-blessed. You have to complete a total eight individual cycles (broken into four two-cycle phases) to finish the encounter.

Destiny 2 raids have always had jumping puzzles and this is no different. Once you know how this specific jumping puzzle works, it’s not hard to get through.

Much like the Witch’s Ritual encounter, the Kingdom of Sorrow jumping puzzle utilizes the Witch’s Blessing mechanic. Divide your raid team into two groups of three and have one group stand on the glowing circle to receive the blessing. A series of platforms will rise and large crystals will spawn on certain platforms. Those crystals will be surrounded by a glowing aura, and you have to be standing within that aura to damage the crystal. Again, one non-blessed and one blessed player needs to damage each crystal to destroy it.

After the Crystals are Destroyed

Transfer the Witch’s Blessing and keep repeating this process of destroying aura and non-aura crystals until you reach the end. If your team wipes, you’ll all spawn at the last transfer obelisk you used, meaning you don’t have to do the entire puzzle from the beginning.

The arena for this fight is divided into three identical sections, once again you should split your raid team into three groups of two. Once the encounter begins, a ‘Gahlran’s Deception’ enemy will spawn at the back of the section. As their names suggest, only one of those three Deceptions is real, the other two are phantoms. Coordinate with your teams and have one player from each team melee attack their respective Deception at the same time.

The section with the “real” Deception will trigger a Witch’s Blessing circle. One player from that section’s team should pick up the blessing and kill blessed enemies while the other player takes care of non-blessed adds. The teams for the other two sections should just keep clearing adds as best they can.

When the blessed player’s Ogre dies, a transfer obelisk will activate at either the left or right end of the section. This next step is a bit tricky as the blessed team essentially needs to transfer the Witch’s Blessing to an entirely separate team on another section. Whichever team has the blessing, both those players need to stand within the obelisk’s radius. Then, one player from another team should enter the radius as well. If all three players shoot the obelisk, the blessing should transfer to the second team’s member.

If you did Everything Correct in Crown of Sorrow Raid Guide.

You’ll now have two teams with a blessed player (the new team plus the player on the first team who started off non-blessed). Work through the Wizards/Ogres cycle again and repeat the transfer process a second time so that all three teams have one blessed and one non-blessed player. Once all three teams have the Witch’s Blessing, the second phase of the fight begins.

You’ll have to work through the phase one mechanics again (killing Wizards and Ogres, transferring Witch’s Blessing) to bring the Deception back and trigger another go of phase two. Make sure you eliminate the Deception during the second damage phase, otherwise it will enrage and trigger a raid wipe.

Crown of Sorrow Raid Guide Crown of Sorrow’s final encounter pits your raid team against an imposing foe called Gahlran the Sorrow-Bearer. The actual fight won’t begin until you shoot one of the three “copies” of Gahlran that overlook each section, so make sure to prep up first. Once again, divide your raid team into three groups of two players and assign each group to a particular section of the arena.

When the crystals are destroyed, a Deception of Gahlran will spawn in one of the three sections. Much like in the last phase, one blessed and one non-blessed player needs to melee the Deception to drop its shield. Once this happens, the large Gahlran avatar in that section will start channeling glowing green energy from their hand. Shoot their glowing hand and they’ll slam their massive axe on the section, killing the Deception.

Keep repeating this Deception-killing/crystal-destroying process while also remembering to transfer the Witch’s Blessing whenever the timer runs low. After you kill three Deceptions, one of the larger avatars will start channeling green energy with both their hands. Shoot their hands to interrupt the channeling process and effectively stun Gahlran. Two of the larger avatars will disappear allowing you to directly damage Gahlran by shooting the remaining avatar in the face.

Repeat this entire process of killing Deceptions, destroying crystals, transferring the Witch’s Blessing, and damaging Gahlran to ultimately win the fight and the entire Crown of Sorrow raid.

Destiny is produced by Bungie.net